First Three Episodes available to listen to for free now!

I have Written and Narrated a six part Audio Book based on the blog 'Letters From The Amazon' listen to the first three episodes now! 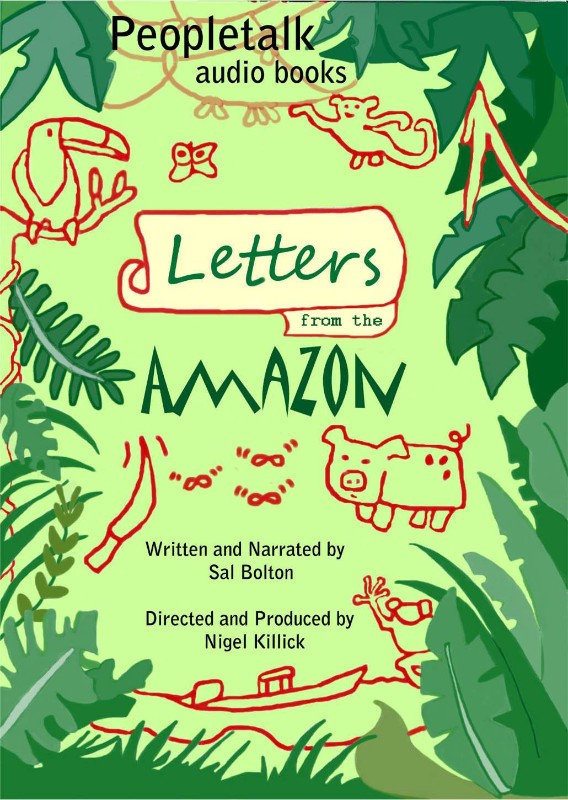 Episode One : In Dr Jones Footsteps
Episode Two: Into The Amazon
Episode Three: Welcome To The Jungle

'Letter's from the Amazon' This amusing and enlightening story is told in in six short audio episodes.

For those who enjoyed listening to Sal Bolton's 'The Call of Africa', you are invited to follow her on another adventure, this time into the rain forests of Ecuador, South America.

Sal, inspired by her childhood film hero, Indiana Jones, and with only a basic school-girl knowledge of Spanish, attempts her own adventure into the Amazon, one of the most mysterious and formidable bio-diverse ecosystems on the planet; a place that has drawn explorers and travellers for generations into its dark and sacred heart.

'Letters From The Amazon' hopes to unlock the reality for us of living and breathing something of this spell-binding cocooned world that is life in the Amazon; revealing, as the adventure unfolds, precious glimpses of rare wildlife, medicines and flora and fauna that are found hidden away in isolation. It should inspire in us the need to preserve and protect this unique, irreplaceable endangered eco-system.

In her own words,

"Hola, welcome to the jungle. Come on in and listen closely to the hidden calls of the wild. There's something about saying the word 'jungle' which immediately invites the thoughts of danger and intense curiosity: a secret Utopia which only the boldest of spirits will dare to venture into. So I decided to pack my bag, and go it alone; well, sort of."

Based on Sal's journal, notes and letters whilst living in the rain forest, this series highlights some of her most unpredictable, amusing challenges and mishaps and adventures. Despite being lost among the indigenous jungle locals and their customs, she makes it to her destination “with”, as she puts it, “a little help from my inner guardian angel!”

The episodes follow the emotional highs and lows of the journey of an English 'Gringa', as she shares with us the reality of living in wild isolation. We discover the magic and sacredness of the rainforest as we are carried along on a canoe journey to a remote place upriver to visit an indigenous shaman.

Sal tells of the marauding, biting mosquitoes, jungle bus rides and of being caught in an Amazon thunderstorm. Her occasional pangs of frustration tell, in a humorous way, of her experiences of 'Jungle Fever', things that go 'bump' in the night and how her loneliness is healed by a curly tailed friend.

Listen to the First Three Episodes for Free at PeopleTalk Podcasts