Letters From The Amazon - Part Five

PART FIVE : QUEEN OF THE SWINGERS AND DAY OF THE DEAD

I´ve just been picked up by a police car and taken in to the local town of Tena would you believe! not for a bad reason I assure you! well, this morning I´ve been attempting to make a bracelet with Josephina who´s a Quichua Arts lady who comes to the station everyweek - of course I go and pick the most complicated braclet but pretty one to make and then can´t do more than doing 5 minutes of the thing, so I paid her $5 to finish it for me haha!.

Well Hitchhiking here has become a very normal thing. Last week I had an attempt of hitchiking on the roadside outside the station. After waiting 30 minutes in the stifling heat for a bus that was just not coming. I noticed a white pickup truck heading down the road towards me so decided to stick out my thumb and try my chances. To my surprise the truck slowed down and I approached the window to ask the chubby driver if he was going to Tena and he said yeah!. I went to jump in the back with the bananas but he shouted to me to get in the ´carro´ (car) and lifted up his little boy that looked about 4 or 5 years old, out of the passenger seat as I got in and then he sat on my lap reading a map of the world - he was so cute and Michael Jackson was blaring out of the radio which was pretty sweet!. Another couple were in the back holding a small baby as the wind sped through the window on the way to Tena through the jungle - I paid him a dollar for the ride which pretty much is the norm or sometime they don´t ask for anything. Apparently hitchiking is what you do here to get around in the Amazon. Tena´s a pretty interesting Jungle town with a huge volcanoe looming over the jungle about 50 km away. The funny thing is that there is no sense of 'Health and Safety' - they were constructing a new road but they won´t let cars go on it but will let you walk straight through the construction site around the bulldozers and builders!!?!? its crazy!! 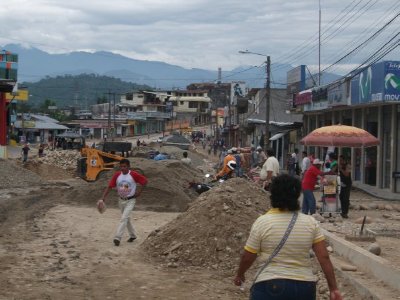 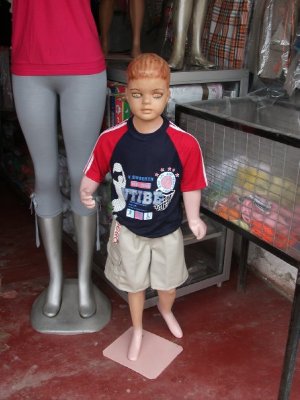 A Natural High - Above the Tree Tops

Quite 'Amazing' isn't it?

At the station we have an observation tower deep in the forest which is about 30 metres high above the Amazon canopy. You need a harness to climb it with two clips that you´re supposed to clip yourself to the tower as you ascend higher through the canopy. When you reach the top, theres a small platform big enough for three people - the view over the Amazon skyline is really breathtaking of the 2,200 hectares of the rainforest and the Napo River, its the peacefullness place on earth. We were really lucky to see a Many Banded Aracari Toucan and a Blue Swallow Tanager which was really cool to see in the fruiting trees - and then a bee stung my foot and I´m jumping around this tiny platform swaying 30 metres above the canopy shouting Óuch!!!!!! - there´s some right little buggers out here - the worst are the Conga Ants who are giant ants (about 6 inches long) that bite nasty if you lean against them on a tree or something, pain can last 6 hours so I'm told. Living in Amazonia certainly tunes on your awareness for your environment. 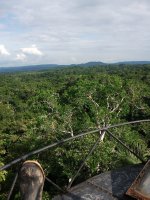 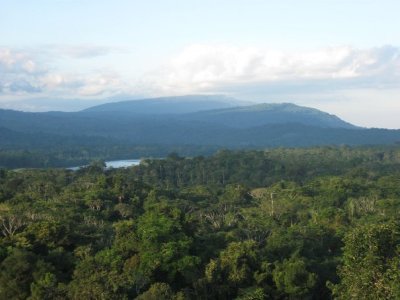 The 2nd November was ´Dia De Los Muertos´which means ´Day of The Dead´and its a national holiday where everyone goes to the cementries to celebrate the dead and feast. It´s quite surreal, flocks of people come the cementry and decorate the wall space (the dead in Ecuador are put into the wall :/) so some of them look gorgeous. They also eat ´Pan de Wawa´ which is Quitchua for ´Bread of Baby´which is like baby shaped bread decorated with colour flavourings. Surveying the local retailers is pretty interesting, especially the manacins, they are really scary! especially the child ones - freaky!. 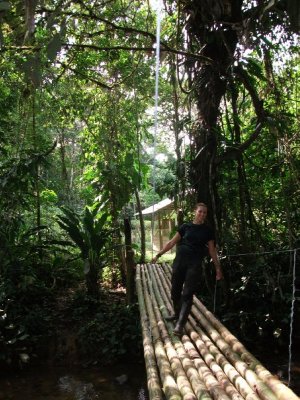 I´ve also done some Yoga here in the forest (I know) with the cleaner of the station which was pretty hilarious (my juvenile sense of humour kicking in). The main project we´ve been doing is constructing a footbridge in the reserve out of Bamboo - so attempting to cut this stuff is quite a challenge (really its not that easy) we were using every sharp tool we could think of and then resorting to a machete and then jumping on it! Then I got stung by the bamboo spikes which are sooooooo painful, you have to relieve the sting by rubbing it in your hair which is weird. We then have to carry it to the river which is really hard work. Constructing the bridge is a pretty interesting task to see - you´re kind of lost in translation with all the rapid spanish bantering back and forth, but doing the best I can by pointing and saying ´Si?´everythings quite slow here and nothing is planned and always improvised most of the time. The bridge looks awesome though, at least you can walk on it. I was then invited to go and play football with a local community - being the only girl on the team. A sign of an outer influence from the isolation of the forest. I was pretty chuffed we won 4 - 1 against Latin American players and the fact that I scored a goal made it a whole lot better aswell as playing in a late afternoon lighting storm - pretty cool. Sometimes we´ll go dancing in Tena and find ourselves salsa dancing (or attempting to) with the locals who are just really good. I´m finding my way around by using a children´s colouring book I´ve been given of the area that I use to ask directions haha! 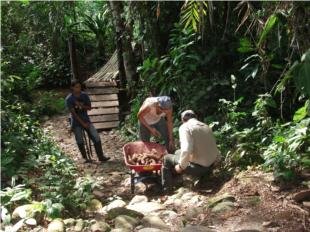 There´s lots of animals here in Ecuador and I mean everywhere! We have a crab spider living in our bathroom at the station who we have named 'Matilda' - she only comes out at night as she´s pretty shy but she keeps loosing her antennas so we kind of feel she´s our pet. On one of my adventures into Tena, on the streetside, there is always a man selling guinea pigs, ducks and PUPPIES in cages. He tried to get me to buy all three and started pulling them out through a small hole in the cage and handed me three ADORABLE puppies. I really wanted to take them coz they were in such cruel conditions. Then I got on the bus back to Jactun Sacha after cleverly outwitting a vendor who couldn´t read the price tag on a bag I wanted and convinced them it was $10 haha! on the bus I ended up sitting next to a little girl holding another puppy! it was so cute jumping on me I had to help the little girl to stop the puppy jumping out the window!

Some of our local creepy crawlies.....no joke I used to be scared of these things as a kid.... 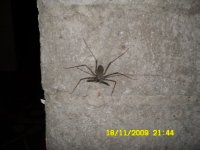 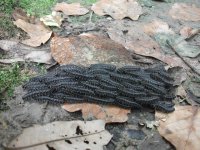 Well, thats all for now, maybe i´ll go and find another police car for a ride haha!