Letters From The Amazon - Part Nine

PART NINE: BACK TO SCHOOL AND DEEP LESSONS IN THE RAINFOREST

Ok I´m sick with a cold but no worries I have the worlds medicine's a stones throw away! so just drunk some tea of boiled bark off a Cat Claw tree for my cold and eaten in a restaurant in Tena with a sloth living in the roof how cute! but here´s some more stuff thats been going on with more of my adventures in the Amazon....

Working at the 'Centro Conservacion Plantas Amazonica', a lady came into the garden inquiring about the 'Cruz Caspi' tree we have - its a natural contreceptive ´no more babies tree´ where women could drink when they don´t want children anymore. She seemed quite serious about the no more children arguement which was kind of nice having her kids standing next to her when she said it! This gave Sergio, the head ranger the idea of finding 100 stems of the 'Cruz Caspi' tree to pluck out and sell them for $1 at the centre, thats like 50p for this medicine that stops you having babies - think we need the same idea in Britain mmmmm.

Speaking of children (niños) the only time I have actually felt like I was putting something into the rainforest was visiting a local school 'Chicicu Rami´where we took some 'Íshpingo' plants for them to make their own garden. It kind of involved us going into the classroom with them all staring at us and having to introduce myself as 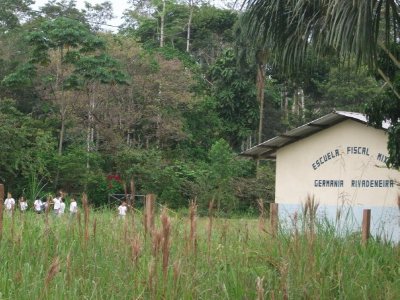 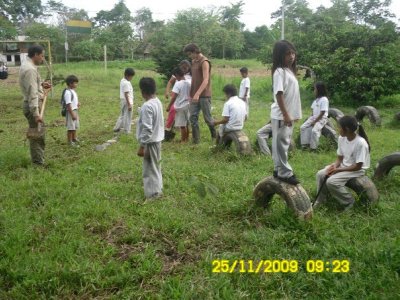 Then the other volunteers did this presentation where I kind of recognised a few of the words about how they wanted the children to make the garden and allocated them tasks including macheting the grass down, watching 8/9 years old with machetes are quite a sight - they are really good!. Then they planted the trees in their new cleared garden which was sweet with the exisiting rainforest towering in the background.....and then play time! The kids took a particular shine to me and the amount of them trying to climb my legs like a tree were causing my trousers to fall down! I attempted to play from what I gathered was cat and mouse but obviously there was going to be a few accidents when they insist on doing it on the concrete! I love the kids though, it was particularly fun lifting them up with their basketball so they could reach the hoop - was so cute. They work really hard, really good kids.

Back at the reserve, I walked through the jungle to the bathroom when a found a small bird was caught flying around the place trying to get out, so I was entertained with a broom trying to usher it out with not much success while it was squaking at the top of its voice. Also in the reserve, I came across a small black wiggling thing on the ground.....then it rolled over to reveal it had bright fluroscent orange bands - a baby poisonous coral snake! very rare to see but generally when you see bright colours - stay away!. Also when I was working in the Organic Garden, we were planting new beans and cutting down some purple bananas.....little did I know that the bunch I was carrying was the home of a tarantula! but I got over it by munching on some sugar cane, its yummy...grows all around, just strip it away and suck... 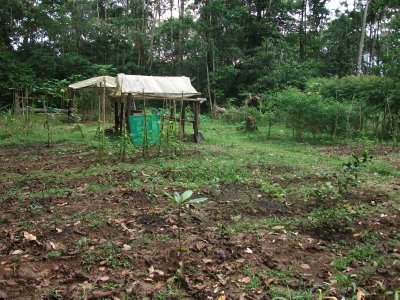 As the reserve is so big at 2,200 hectares you can do a self guided tour through the rainforest with a book. I decided to go it alone armed with a machete and the book and headed into the jungle to learn a bit more.

It's amazing walking through the jungle alone, having the rainforest to myself - but I hadn't been this deep in the jungle all by myself before so after I got over the initial feeling of being vulnerable and getting totally freaked out at the same time as the noises are so weird out here. I slowed my pace down and stopped in my path to see tiny little cutter ants carrying leaves one behind the other in a straight line across the forest floor up over tree trunks and off into the forest - very cute 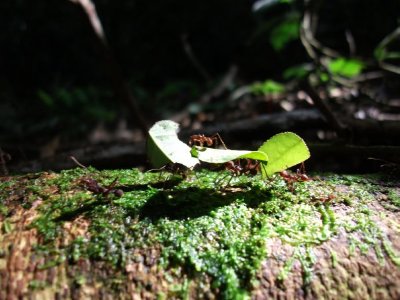 I absorbed the feeling of being engulfed in what they call the ´primary forest´which is where the canopy is really thick and humid with the reserve being 70% of this and 30% 'secondary forest' where there's more crowding among the shorter plants and the canopy is more open. What really annoyed me though are the amount of spider webs that choose to be right in the path and parallel to the height of your face! egrghhhhh - I was forever pulling them off and they stick really bad aswell as having a thousand things to trip over, stones, bumps and tree roots ha!

For a millenium the South American Indigenous people found in the forest shelter, food and medicine provisions for their survival and their spirtual life. The Spirit of the Forest is very deep and rich where the indigenous people believe trees and animals have souls and their spirits can take on human forms. They prefoundly respect the forest and its inhabitants, asking permission from the spirits of the forest to extract something, to cut a tree or hunt. In addition, they follow specific rituals when collecting medicinal plants and their stories of the forest spirits have been passed down by generations by word of mouth 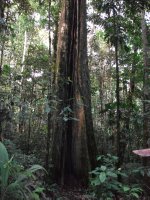 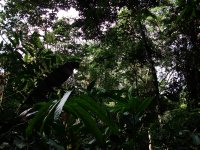 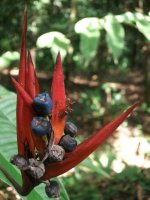 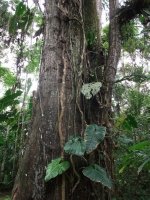 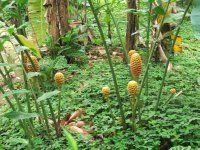 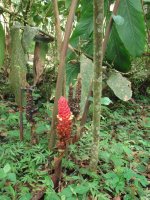 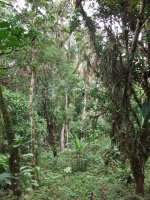 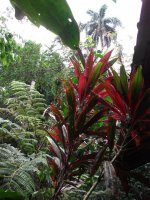 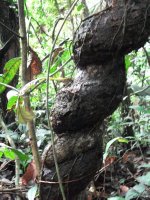 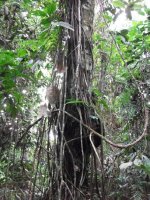 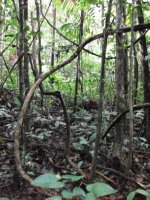 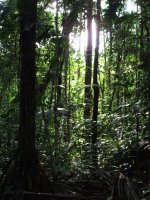 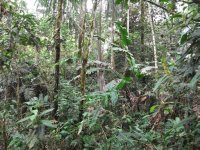 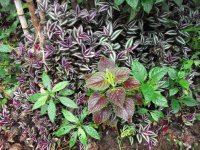 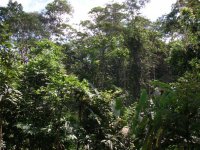 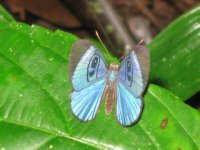 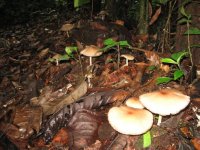 The trees are what I find amazing in the rainforest.....there's 246 species of trees in one hectare! many of them in the Amazon have roots which are visible above the soil, supporting the trees to allow them grow really tall without having deep roots penetrating the earth...hence why they blow over easily in storms. But it also allows them to lean towards the sunlight when their roots die to catch any sunlight penetrating through the canopy. Clever hey! There's two types.... 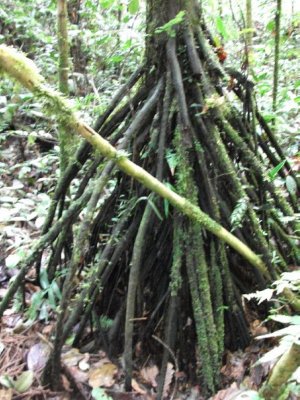 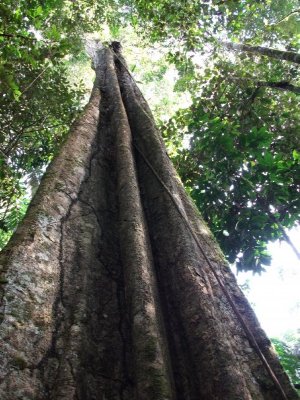 Buttress Roots are solid, flat and vertical where native people would strike them to communicate

I came across these MAHOOOSIVE Trees which are like the tallest, thickest trees in the rainforest called 'Camatuhua' trees in Quichua- their fruit drops off and are taken by animals and rodents who eat them and then bury some of them do that they regrow in other parts of the forest - kinda sweet helping eachother out. Vines grow on top of the trees to obtain the light they need - they are awesome though!!!!! 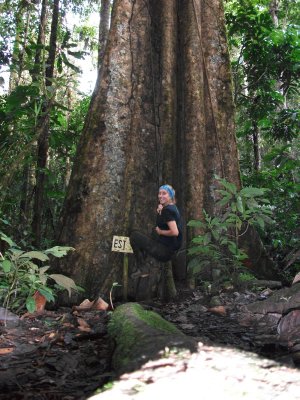 There are some really obscure plants out there - the really large leaves are shaped with a point on thr tip to steer water. My favourite are the 'Labios de mujer' ´hot lips´they are bright red flowers in the shape of huge puckered lips on leaves - really cool. There's also Cacao trees which are the raw chocolate where Aztecs considered it a sacred plant and used it's seeds for money - chocolate for money mmmmmmmmm 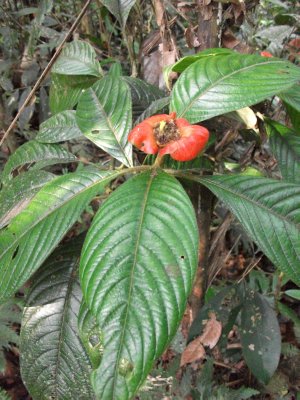 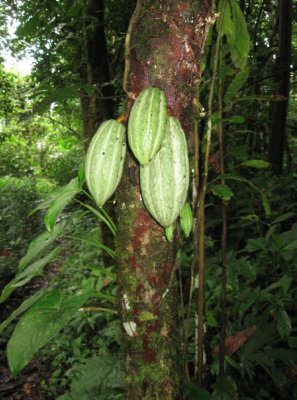 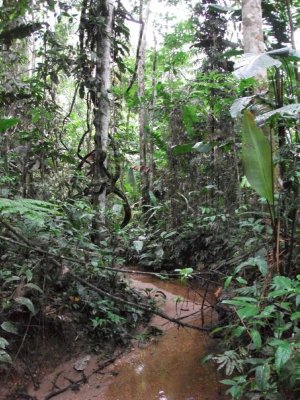 Y'know rainforests have tea coloured streams that run through the jungle which is from the leaf protein which leach into the water from the decompsing litter surrounding it mmmmmm. A smart move I made was to not bring a torch so I had to find my way through the forest before the sunset because when its the dead of night - it is so dark, you cannot see your own hand in front of your face. It's super thrilling

Restoring my zen in the tranquility of the forest, I could hear the soft buzzing of wings and there was a hummingbird right in front of me.....dead cute, they're attracted by the bright colours of the plants. They are so mesmerising and only stick around for seconds....so pumas and jaguars next time..... BUT, one night I was going to brush my teeth and I noticed something jump as I was brushing and saw it was one of those teeny weeney green tree frogs that you never ever see - so I was running back through the forest to get my camera with the toothpaste still burning my mouth - you NEVER get to see those little dudes, I was lucky. 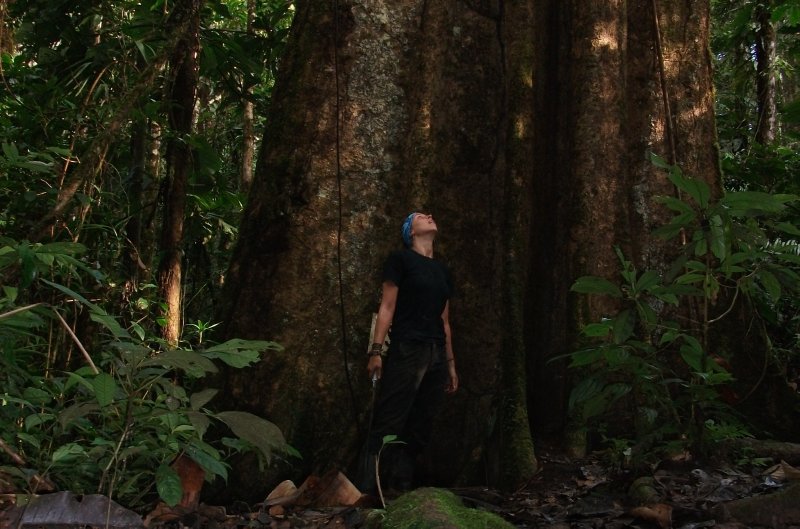