Letters From The Amazon - Part Eight

Lucky to be in Tena at this time of the year! - the 12 - 15 November is pretty special. Alot of the roads here have names after certain dates and months of the year so there is some significant meaning there.

15 Noviembre is the main day of celebration in Tena as it marks the date of it's foundation - its a big party 'Fiesta' where many people from Ecuador come to the jungle town to join in with live music and community events. Of course we couldn't let the opportunity pass so we ventured into town by hitchiking from the jungle with these two nice men that we paid a dollar or two for the ride in their jeep.

The town of Tena always tends to be sooooooo much hotter than the jungle but upon arriving, we wandered around the hub of the town centre and the bustling market when we saw a poster for a bullfight (torros) happening at 3pm. I was pretty resilient to going at first as I remember back in Quito refusing an invitation to go watch a bull fight in the collesuem because of my dislike in seeing the bull being killed for entertainment. Bull fights in small towns in Ecuador are known as ´pueblo´ (small town) bullfights and a popular source of entertainment for families in South America just as much as families in the UK going to see a local football game or families in the USA going to see a local baseball game or the rodeo - this is their entertainment......I was just hoping the bull would not be killed

With this in mind, I took a chance to witness this opportunity when we asked a guy selling 5 cent yoghurts where it was and sort of understanding his directions, raced through the streets to find the arena, which was a wooden rotunda bustling with people outside. As we neared closer, they were congragated around a mobile stall selling sunglasses ha! We bought a ticket for $5 from this one lady behind a little thatched window - and it was more like pushing to get to the front first which was the ticket queue. I was a still a little curious about the bull fight though as we entered the arena. I hate the ones in Spain where they stick sharp poles in the bulls and then kill them, so I was still a little apprehensive, pleading in my mind ´Please don´t kill the bull! Please don´t kill the bull!´ as we waited for it to start. Looking around, absorbing the atmosphere as the crowds gathered in the stands, the chatter of Spanish voices drowning everything around me, the arena was totally made out of wood and iron and you had a really good view. There´s no maintenance in the bull fight arenas, all the stands are made from old wood and bound together with wire so it was quite an adventure finding a stable seat. They even had a guy balancing on the stands selling panama hats, donots and balloons! 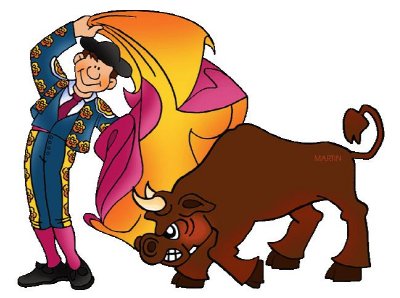 Of course when they say it starts at 3pm they actually mean 4.30pm in Ecuador time (after an hour and a half of a guy on the microphone doing a ´soundcheck´ of ´hola, hola, once, dos, tres, hola hola' about three trillion times) they opened up the big iron doors and let the bull out into the ring.....

Ok, bullfights are CRAZY, CRAZY, CRAZY - the local bullfighters or 'matadors' as they are correctly known as take it in turns to tempt the bull which was more of a young bull with their pink and red cloths to charge at them and try and touch it with coloured wooden pegs to score points - its pretty extreme. The crowd would gasp in thrilling excitment as the bull charged towards them and I couldn't help but feel a little pleasure, when the bull got it's own back for being tormented rapping the matadors and sometimes getting pitched in the air and trampled on by the young bull (and I probably would rap them too of I were the bull) but its quite funny when the bull chases them around the arena and the crowd just screams!. It just has that teasing edginess to it which makes it entertaining for crowd.
Mimicing the protocal of 'sports events' in the western world, they also have their half time entertainment where a girl comes in and starts to sing and salsa dance in the middle of the bull ring with all the bull poo everywhere. haha! They also have these MENTAL clowns that come in and do an act with the bull by jumping over it and all sorts, they are CRAZY and even went as far as getting booted right up the bum with its horns! You do feel for the bull after a while though as it gets really ticked off - but even random people from the audience were jumping down into the ring to provoke the bull and kids were running across it, no one cares its just mental to see! Only in South America.

Later we went to the main plaza where there was a big street party ´Fiesta´to mark 15th Noviembre. We passed the sign again for the Bull fight and piecing together the spanish words, realised it had said all along that the bull is not hurt in the event - they aren´t in ´pueblos´bullfights anyway. The fiesta was a huge gathering in the plaza with tables everwhere selling drinks, food, you name it. Colourful bunting surrounded us and drew the attention to the huge stage set up for an Ecuadorian band belting out some Ecuardorian party track, so we felt the urge to get up and dance in the square amongst all the Ecuadorians who seemed to just stare at us! We did get the attention of two old men who were really drunk by like 9pm and would copy any dance move we would do - it was hilarous but good fun. The Latinos know how to party.

Earlier in the week, I felt like I was in the Army, I had the job of sorting out all the random boots in the reserve into pairs and sizes and washing them in the river, quite a task. I was feeling maybe I will build up a phobia about Wellington Boots being surrounded by so many!
As the station is on the main road in the rainforest you get a lot of road kill. The boys were coming back from the fields and found a dead horse (full grown) on the road - it took six of them to drag it up the road until they could find a place in the forest they could leave it - its nasty, its in open view of the road side so we see it slowly decaying everyday and then you just have the black vultures feasting on it - its nasty! Within a week the horse was merely a skeleton, with not an ounce of meat left on the bones shudder..... 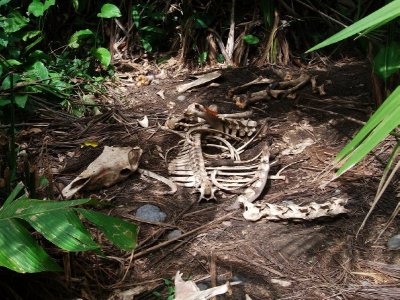 Speaking of more animals, freaky thing happened the other night.....we had a power cut in the station so were hanging out in the hammocks in the pitch black underneath our thatched roof. One of the guys came over to talk with me and noticed something on the inside of the roof above my head - when he shon his torch on to it, it revealed (no joke) a metre and a half long Boa snake! ahhhhhhh!!!!!!!! it gave me quite a startle but after a while it was cool to see a wild snake, just happily hanging out with us sheltering from the rain. I think the way to stop being fearful of something, like I've found with large insects, snakes and spiders, is just to innocently see them for what they really are, they're just creatures after all with they're own kinda beauty. Some of the guys tried to poke it down with a stick but it displayed how strong in all its monstrosity when it held on to the stick and took it off them! was awesome to see but sooooo freaky to see actually how long some of these snake are. The Boa isn´t one of the poisonous snakes of the Amazon, there´s about 53 species and only 8 of them are venemous. We've named the Boa Cynthia and pretty sure we'll see her again. 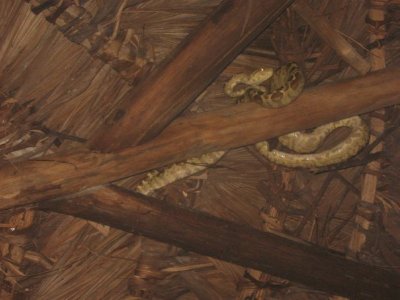 I didn´t escape the animal fest and they like the dark, so when the powers out - out they come. A fruit bat got into the station and couldn´t find its way out so we were ducking and diving at it was flying around our heads! You are never short of excitement in the jungle, thats why I love it! oh and did I mention the stars are BEAUTIFUL out here, you can see everyone........we like to chill out away from the canopy lie in the middle of the road in front of the station and then rolling out the way when a car comes haha! c'mon you've got to have some adventure sometimes....