Letters From The Amazon - Part Seven 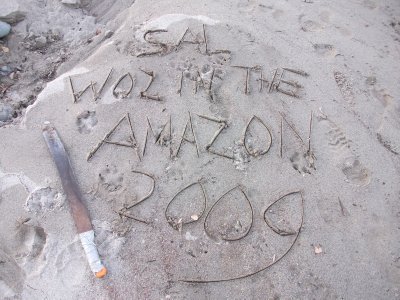 Hola! Ok, the electricity has been off here in the forest for a looonng time,so here´s a nice big chunks of my adventures in the Amazon.....

The beginning of the week was pretty interesting. While working out in the forest a tree branch hit me and grazed my forehead - we have to clear some areas by pulling out the trees which often results in being thrown backwards when it eventually pops out! I´d been to the local market and bought a small bottle of some 'Sagre de Drago' lotion which looks like real blood which is sap from the tree's truck; you lather it on and hey presto all is healed! It's brilliant, no plasters, nothing.

This is why rainforest deforestation has gotta stop.

Coming back from work from the Centro de Conservacion Plantas Amazonica, we caught a ride from the head ranger Sergio (the guy who is scared of bugs) in his car - so 8 of us had to squeeze in his little cream Fiat Uno - S thats 15 years old - so I had to practically lean out the door window....but the drive is beautiful check out the views..... 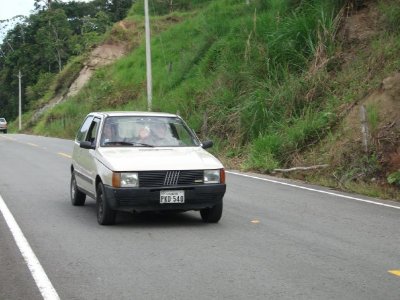 Squeezing in to this little beast... 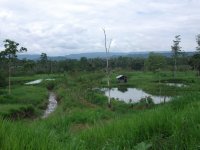 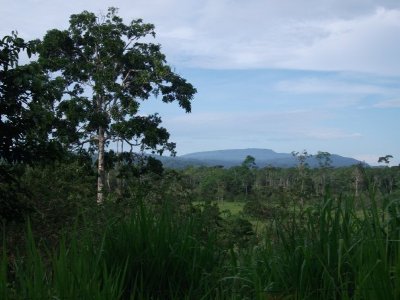 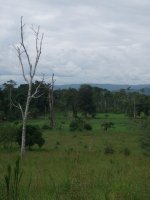 After work in the heat of the afternoon we tend to go and play in the Napo River which was a 15 minute walk through the jungle (in board shorts and flip flops by the way) and accompanied by Spike our neighbours fluffy dog that comes to visit us at the reserve. Spike leads us the whole way to the river where we were met by confused locals on the otherside who were panning for gold and washing their clothes, looking at all these 'gringos' jumping in the Napo aswell as Spike following us right into the water to come play. The current was pretty rapid and on occasions found ourselves drifting downstream - riding the river or chasing our football that had drifted away. Playing in rivers is so exhilirating! 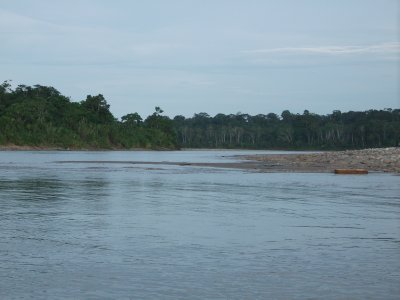 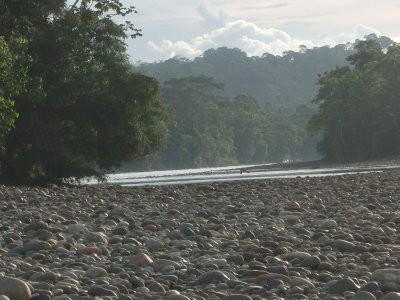 At the Centro de Conservacion Plantas Amazonica 'CCPA' at the Jatun Sacha reserve, there is quite a few medicine plants which I´m reading up on and writing about them. One night by candlelight in my cabana, I was writing up my notes when I looked down and the teeny tinest caterpillar that ever existed came crawling up my thumb and out onto my pen - the insects tend to stick on me alot here. I think the animals like me, even Spike likes to walk and hitchhike with us to the CCPA and then be a nuisance to us by lying in the plant beds that we´re trying to turn to the point where we have to shut him out and put a log across the door - he always seems to find a way back in which we can´t work out. Don't underestimate the animals out here....but that's the beauty of them.

Anyway, onto something different a change of scene....well sort of

Mid week, another volunteer and I left the reserve and trekked for 3 hours with a couple of the rangers through the jungle to 'Cabaña Arajuno´ which is in the middle of a clearing in the jungle near the river Arajuno with an organic garden. The rangers stay during the week to patrol the forest to make sure there are no naughty people illegally cutting down the forest. The amount of sweat that poured out of my skin I didn´t think was possible - something new I´ve discovered about myself....I sweat alot and what comes with sweat....it's insects! thirsty for the precious salt from my skin. Not that it wasn´t an uneventful walk - we had to climb over barbed wire quite a bit which is slightly thought provoking and gave an edgy rebelliousness to our act. The rainforest is spoilt for thrilling quanties of fungi which we stopped to look at numerous times aswell as admiring the webs and bodies of spiders in between having to bend over and mimic a tortoise every now and again to relieve myself from my heavy backpack. Funny enough when we were standing under a tree, I felt a huge thud on my head and this mother of a lemon had fallen out the tree and hit me! ahhhhh 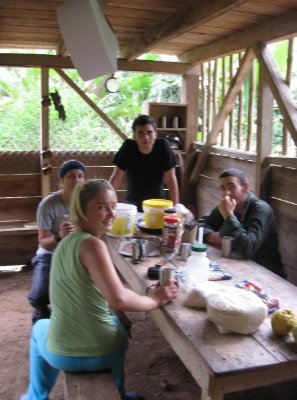 Once we finally emerged out of the jungle and into the clearing to the Cabaña, we went to bathe in the nearby Rio Aranjuno where we had to wade across the river to reach the sand where we swam across the river, rode logs and jumped off the big rocks into a plunge pool - which wasn´t so funny when my bikini top flew off!. We then attempted to learn Amazonian calls using our hands from Elibar one of the forest guides which was pretty cool ( I stress the word attempted but sounded more like a dying bird). 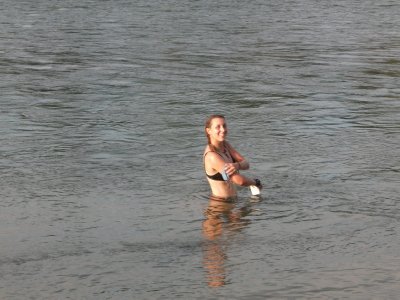 Bathing in a Rio Amazonia.....like no other, very refreshing

Anacondas are in the Amazonia Rivers, but they are pretty rare to see, in fact even the natives rarely see them (and they can grow up to 10 metres long) and your best bet is seeing them in a zoo. The sound of thunder sparked us to start making our way back to the cabana as a storm was approaching...try this - wading through a River who´s current is rapidly increasing at a snails pace, cutting your feet on the rocks (yep second time in my trip to Ecuador) while hearing the crashes of thunder up above you - yep not easy, but made it across the river before the storm came.

You know with the amount of rainfall the Amazon gets - a river can raise 7 metres in one night!. Yow!

After I finally made it across the river, two ladies and a little girl came along - one jumped in a canoe that was tied up on the bank and canoed to the other side in like 10 seconds (damn it, I needed that 10 seconds ago!) and the other lady and little girl followed me through the jungle with their dog Minerva to the Cabaña to eat with us.....I then spent one of the most uncomfortable nights of my life frantically itching my legs covered in lumpy bites from the river flies ahhh there were so many it looked like a join-the-dots map! 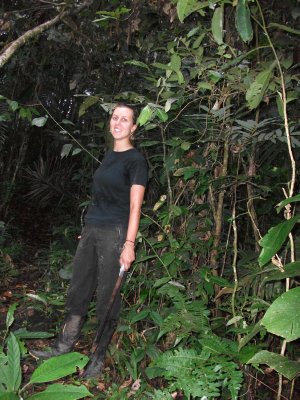 The next day at the Cabaña Arajuno and relieved by bites had soothed, we embarked on a 6 HOUR trek through the rainforest patrolling the circumrance of the area around the Rio Arajuno for illegal deforestation. We trudged through the forest floor sludge and having Elibar (or ´Gato´ as we call him which means Cat as he has cat eyes - weird ) led the way as we macheted through the thicket of the jungle and getting COVERED in irritating bites - quite an adventure. 'Gato' would stop and tell us about interesting plants, many of which are medicinal plants and if you know what they look like they are everywhere and have multiple uses in treating illnesses and conditions. Fortunetely I wasn´t totally lost in translation - a german girl with me translated a bit, so I wasn´t totally clueless. Many plant leaves are used for shaman rituals treating sores and bleeding wounds. One root 'Shia' its called is used as a remedy for gum infections when chewed and a tree 'Leche de Oyea' (Milk Tree) when you cut the bark bleeds a milk like sap to treat stomach aches and another plant 'Cola de Pato' meaning 'Tail of Duck' when crushed you can use for shampoo - very cool!

We walked along the River and met an indigenous family canoeing and gold panning (they even found some grains of gold in the river when we there). The wood they use to build canoes out of is extremely durable and can last up to 20 years on the water. We also walked along the river through a housing unit of one of the men on the river who borrowed my binoculars to spy on the people cleaning fish on the other side. It was quite funny as at the same time, this young girl with a baby wrapped on her back came running out and down the hill screaming in Quitchua and her husband and grabbed a canoe to go after him - I don´t quite know what she was screaming about but she seemes pretty mad from my point of view. Over the 6 exhausting hours, I did get to see spectacular views of the Amazon which a camera can´t ever replicate AND I got to see a teeny weeny Rainforest frog on a leaf (which are poisonous). It´s really weird walking through the Amazon coz every noise catches your attention - we even had random people running through the forest carrying fish in their shigra bags which is pretty startling when your in the forest. A popular way to fish in the Amazon is dynamite fishing where you will hear sounds of explosions every now and again of boats throwing dynamite into the river to poison the fish. Halfway through the patrol, we did find a HUGE tree which you could have got a few people around that had been illegally cut down ;( but it looked like the wood was too soft for them to use anyway so it was a absolute waste. It really is shocking to see a tree that's hundreds of years old, home to many nutrients and habitats pointlessly destroyed...it sucks. 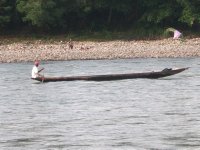 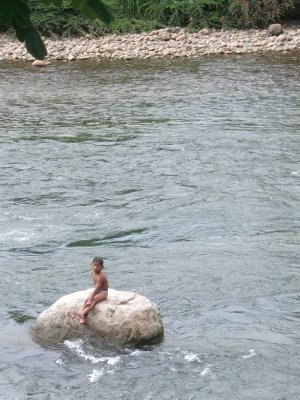 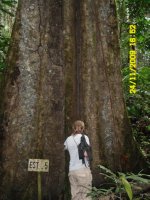 The main problem with rainforest deforestation is the farmers chopping down horrendous amounts of rainforest, trees and plants so they can clear it for grazing land for their cattle - but then after 3-5 years the fertility quality of the soil drops by 30% or so and then new forests are cleared for new soil. What is needed is research into finding alternative ways of farming to make it more sustainable and prevent more destruction of the rainforests

At some point we did think we heard a chainsaw but turned out it was just the motor of the boat on the river - the rangers come out to do this pretty much everyday and they live at the cabaña over night - pretty dedicated. The weather also decided to pour down with rain so we had to shelter under a fallen tree trunk - this made the ground SO sludgy and muddy and irritating as you would get stuck in the mud literally like quick sand. A exciting thing did happen though while we were crossing a fallen tree over a river - my boot slipped off the side of it while I was balancing along the trunk and my leg slid off the trunk which caused a few screams as I was half hanging off! ahhh Lara Croft eat your heart out....

But this good feeling wasn't to last as I've now tried Amazon Medicinal Plants a third time here as I awoke the next day with a headache and painful stomach cramps - Gato picked some leaves from the forest called 'Verdolago', 'Culantro' and 'Pumu Panga' and boiled them into a tea for me to drink which was pretty bitter but all the best medicines taste awful right?

Trekking back to the reserve through the forest - I even got to see some monkeys again which is pretty rare so was very lucky!! 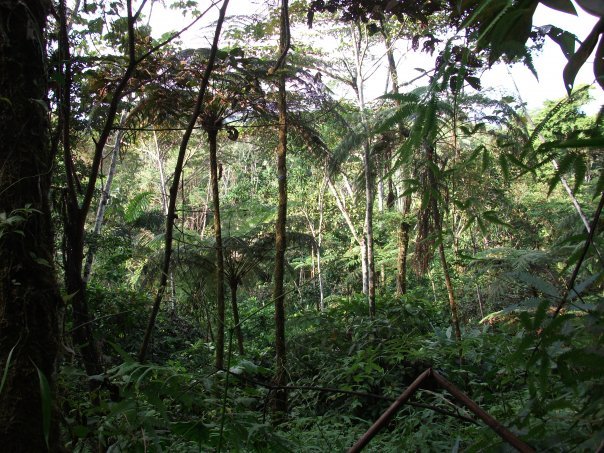