Letters From The Amazon - Part Two

Hola again, now news from my second week here in Ecuador. Still in Quito, my second week at Spanish school began when I packed my things and was moving on to live with another Ecuardorian family for the week. I didn't have the heart to tell Rita I was going to another family on the otherside of town and told her I was leaving for 'del selva' the forest a little bit early. Well I hope I did in my broken Spanish. Before I left though, I gave her a little something that I brought from London, a kitchen apron for her to use. Her son Christian who boasted many tennis trophies around the apartment drove me to school to spare me walking with all my lugguge (two bags maximum anyway). I'm sure I'll see them again.

When morning classes ended, I hailed a taxi and gave the driver a piece of paper with the new address on. He drove around the city for a while and I wasn't convinced he knew where he was going.

So...I had to call the chap at the host organisation with the mobile phone they have given me (and have no intention of giving it back either) to tell the driver where he should be going. After a long chat in spanish on the phone - we pulled up outside what looked like a complex next to La Parc Carolina and the driver was cool enough to carry my backpack in to the main desk where the security guard told me to go up to the fifth floor - a lady named Carmen was out in the halfway to greet me and welcome me into their cute small apartment overlooking the park and across the road from a football pitch. Great view from the fifth floor, the tiny cars chugging along the motorway and I could see at the traffic lights, street performers coming out to stand in front of the traffic queue freestyling footballs and juggling for change from the waiting cars.
I have my own room and my own ensuite and Carmen began to talk to me in Spanish showing me how the shower worked (I guessed she was anyway) one week at Spanish has not made me fluent!

Her son Juan Sebatian, is quite irresistable cute and a little dude. I met him for the first time when I couldn't open the door to the apartment with the key Carmen had given when he came to my rescue. I've spent most of my time with him as the rest of the family seem to come and go so I didn´t see them much or even talk to them a great deal, but when we did sit around a table eating dinner - you feel a bit of a retard like a child learning to speak again when it's pretty frustrating when you're thinking so hard on how to say 'pass the pepper'

Anyway I've spent most of my time with Juan Sebastian who helped me with my homework and had a pet chick at the apartment and would get it to talk down the phone on command (how cute!). When I took a shower, I figured out that Carmen had told me the water is only hot for 10 seconds or so before turning to cold - I found that out for sure! One time it flooded and Juan Sebastian came in with a mop and wearing huge black rubber gloves, helped me clean up. He's so sweet. We would watch Los Simpsons together (in Spanish no subtitles of course) and he loved Harry Potter but had not read the books - so after class one day Juan took me to the bookshop and I bought him a copy of one of the books to say thank you and for the fact I would be leaving for the Amazon on his birthday......ahhhh 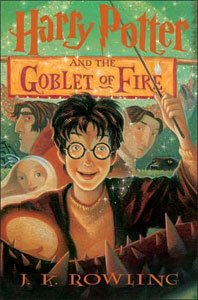 I've been helping him with his English too with a Jesus poster who was making for his class, they take religion very seriously over here. 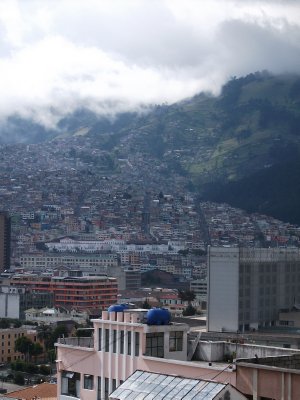 From the apartment, I have a view aswell of the Andes and the city at night but still a 30 minute walk to school or I have to run for the 25 cent Ectoria bus if I'm late. Every morning when I do walk to the school I see two kids, a boy and a girl about 5 years old lying on the streetside - its pretty shocking and when the traffic stopped, they got up and attempt to juggle or do something in the middle of the road in the hope of just getting some dollars for themselves - its really sad to see, so I would go and buy them some bread in a nearby bakery for the day which cost like a dollar which is nothing to me. Its amazing how long it takes for people here to collect a dollar but even the elder women working on the streetside would descend upon the children to grasp a piece of bread. 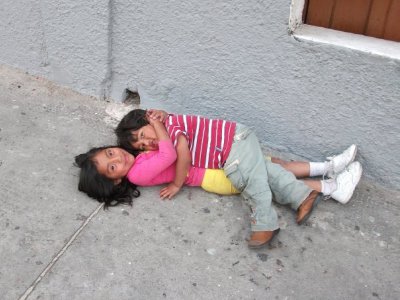 Later on in the week, I had a very interesting experience at the British Embassy where we actually got taken behind the scenes of the embassy (wacky I know) no way anywhere else! It was kind of like that feeling of 'we shouldn't be here'. I had to go talk to them about a departure card I never recieved at the airport on a arrival and lucky for me again (really I have a guardian angel on my shoulders...so I thought anyway) a girl I go to Spanish school with used to work with all embassy stuff in Britain and wanted to go there herself - bingo! It actually turned out I didn't even need the card at all but still a sneaky peek at the British Embassy anyhow! 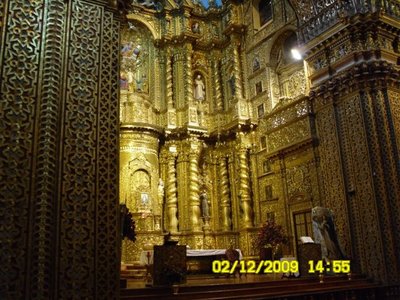 I managed to venture back in to the Old Town of Quito again when were invited to go watch the Ecuador vs. Chile World Cup football qualifyer game on the TV and the city is football crazy! they lost anyhow ah! but we ended up sampling Ecuadorian cheesecake and a REALLY strong native drink which I think was ginger/cinnamon or something but it was REALLY strong. Oh my god. Really strong. We also went inside to see a really pretty church called Iglesia de la Compania de Jesus, the interior made from gold - they say its one of the most beautiful churches in South America which I probably agree as its the only church in South America I´ve been inside!
I´ve also witnessed an Ecuadorian cooking class in school this week- well, mashed up the cheese to go into the soup so I suppose that´s helping I guess...mmmm was good soup though. I do like the food very much here in Ecuador and what they love to eat is´Cuy´which is a traditional dish of roasted Guinea Pig! which of course I´m politely ignoring....I had a pet guinea pig 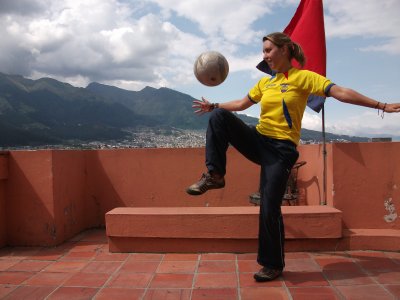 BUT I had a bit of an unfortuante accident on the street this week where I cut my foot open when walking on the perilous uneven terrain which are the streets of Quito. It bled pretty badly and I mean pretty badly on the street - alot of dirt got in it so I had to cut out all the dirt and dead skin and clean it with alcohol which KILLED!!!. It was probably one of the most painful things I've ever experienced I was pretty bummed about it as I couldn´t walk on it properly for a couple of days, having to clean it in the bathroom sink all the time. No more Salsa classes for me, which doesn't help when Latino's like to just come and grab you to dance with them!! Mucho dolor! Must have been bad Karma. Of course the drama didn't stop there as after a evening spent at a popular night spot for us students at a bar near the school, I couldn't face going to do four hours of school after the cheap cocktails in the bar had made me sick. Not the best week in my trip to say the least!

When I could walk again, I've spent much of my time helping a friend from Spanish School find an apartment in Quito sticking up posters around the town and wandering into Ecuadorian Universities and helping a lady find her dog that had run off! we sure covered alot of ground around Quito. Today I had plans to go with two of the other girls from school to the Teleferiqo cable car up the volcano whilst Carmen and her family went off on a fishing day trip. We hailed a taxi to the north of the city scrambling higher through the neighbour hoods which was so traditionally South American with people milling on the street and children running in the road nearly knocking them over when our trip was cut short - Teleforiqo was closed for refurbishment noooooooooo. So another time,

But the sun as set on my time in Quito for now and tomorrow I'm venturing off into the Amazon Rainforest, the adventure I'm excited about the most and the main reason I am visiting South America. I have to leave pretty early so I'm packing up my wellies that I got on the market earlier this week and bidding farewell to Quito and the city. 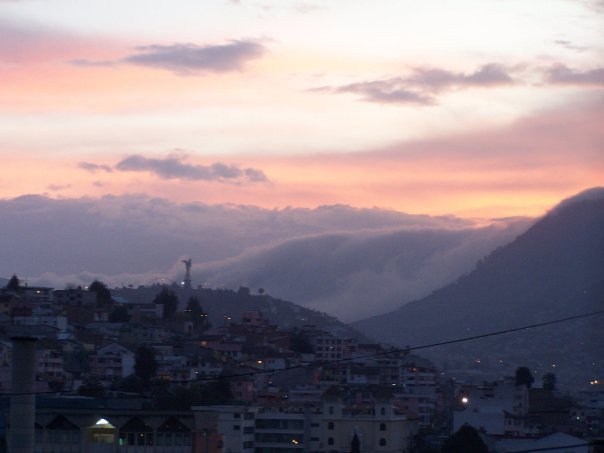 See you in the jungle